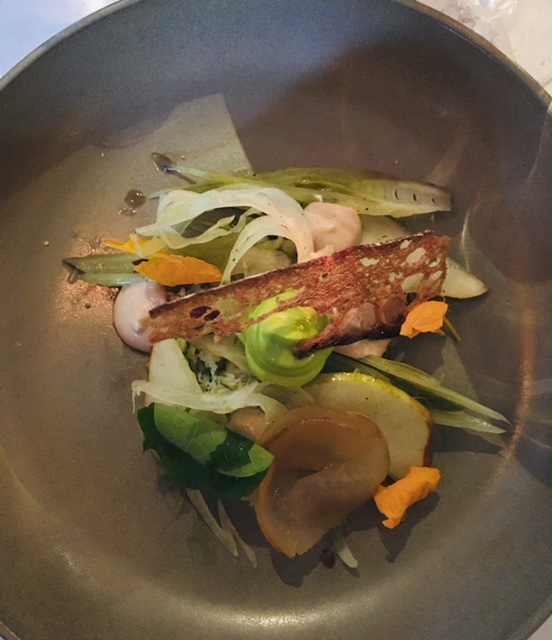 ‘food, especially dried hay or straw, for cattle and other livestock’. On a corner of a Dublin street can be counted seven cafes. All have queues out the door at lunchtime. Having chosen one, queued briefly, decided to grab and go and once again faced the disappointment that accompanies food which does not contain much to distinguish it from fodder; chucked three quarters of it in the bin.

At the counter of #forestandmarcy for the first time later that day, conversation had to be brought to an instant halt as the first bite of this extraordinary food hit the palate. Unable to remember the last time food had stopped a fascinating monologue in it’s tracks, silence was the only worthy companion. Not only did each mouthful create multiple taste sensations, but also came together to perfectly marry those tastes. What an experience. Crab, Fennel, Smoked Almond, Pear: Quinoa Crisp, goat’s cheese, seaweed, pickled kohlrabi, and the fascinating take on Bacon and Cabbage:

Fermented Potato Bread, bacon and cabbage with smoked bacon sauce. Restaurant critics must possess giant thesaurus to find words to describe such food. Words, however do not come close to describing it. When was the last time that the process of eating in a restaurant caused a sensation explosion so sudden that conversation has to cease? Meadowsweet tart, peach, lemon thyme. No words.

Many try but few succeed to create food of this standard.There is room for all types of food outlets in society, from pizzas to burritos, from pasta to barbeque. However, something regrettable has happened in the recent past. It has almost crept up on us and suddenly a tipping point is reached where

We, therefore have a choice to make it seems. We can bow in reverence to the god of convenience and instantaneous pleasure or choose to spend our money to keep real, true, incredible tasting food outlets of every hue alive and profitable.