Food On the Edge of the Future 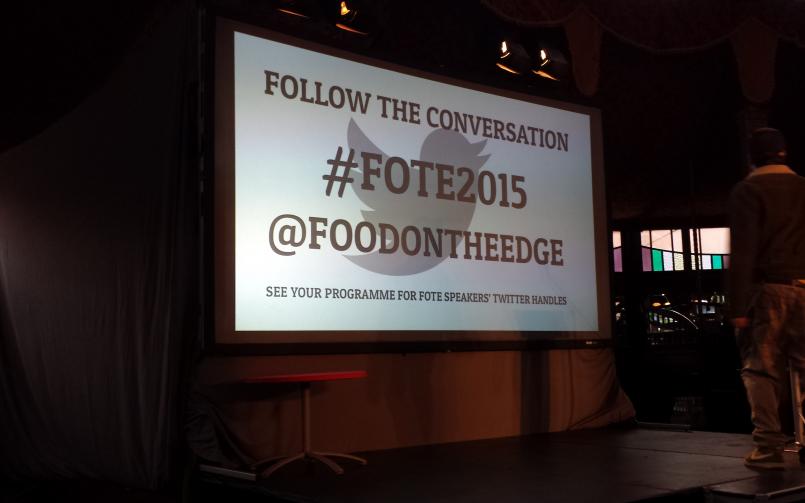 Food on the edge, the two day chef conclave in Galway was easily the most enjoyable, informative and thought provoking industry event I have attended for many years. It was also the most testosterone laden, in spades.

The format resembled opening gifts on Christmas Day, you never know what you are going to get until you open the wrapper. Fifteen minutes of provocation, passion, tension, inspiration, madness and sheer brilliance. Such was the diversity of talent that it was absolutely thrilling. Due to pressures of life and work, I had not conducted indepth research on delegates, thus the surprises in store were fabulous.

There were recurring themes and many were familiar, shortage of chefs,more on that later; food and early memories instrinsically linked, vegetarians who don’t like vegetables,the cynical exploitation of mothers by baby food manufacturers, the role of mother’s cooking in our food futures, putting chefs in dining rooms and waiters in kitchens, stronger links with farmers, pleasure laden experiences, total use of every scrap of every ingredient, local, seasonal, sustainability, obesity and then; Mark Best took to the stage.

Not even an inferno would have budged the audience as you could hear a pin drop. He eviserated the sacred cows of the culinary firmanment, he spoke of an armageddon in real time as Australia has fallen victim to the control of two garguantuan  supermarket groups.He spoke of the ‘golden handcuffs’ offered by the supermarket giants to food producers, he spoke of a present which is rapidly becoming devoid of diversity and a future so frightening that a pall fell over the gathering. He challenged those present to be the custodians of food diversity and security, a sacred responsibility indeed. This was delivered in a low, steady, even pitch which made the message infinitely more chilling.

There was more truth to follow, Mikael Jonsson, whose road to the Michelin Star was longer and more tortous than most spoke of the imminent demise of fine dining.

Young talent is no longer willing to work ’90-100 hours per week for s**t salaries’ so the industry has to adapt and create a better working environment for chefs.

The shortage of young chefs available to the industry was a much debated issue with no immediate solutions on the horizon.

There was brilliance in the work of Niko Romito with the audience salivating over his cappellini with leeks, who warned chefs that their egos were getting in the way of progress. He sees the future of food as the ‘complete removal and disintegration of the ego of the chef’. Ross Lewis again challenged chefs by stating that they can no longer ‘remain food politically and nutritionally agnostic’.

Each of the delegates was brilliant in their own way, driven and messianic in their culinary quest to be the best of the best. These chefs are changing the world in which we live. Whether that be supporting those who produce authentic food or protecting the future of our food, they were committed with a zealousness which was awe inspiring.

Having had a few days to reflect on the experience some clarity is emerging. Food on the Edge was overwhelmingly male with 5  inspiring women from a total of 40; these were Jess Murphy, Clare Smyth, Amanda Cohen, Elena Arzak and Connie Desousa. This it is certain, was not a conscious act but a reflection of female chef representation in the industry. At management level, women appear to be well represented but the kitchen, specifically the Michelin starred kitchen seems to be a male dominated, testosterone filled zone. The chef’s ego was mentioned many times over the course of a few days. The sheer brilliance of the chefs who spoke was clear, however there was also an edge, an underlying tension which suggested high intolerance for lesser talents. There was little mention of mentoring, caring for, nurturing and guiding new male and female talent. As a conference, it was unique in my experience that all but a few peppered their presentation extremely liberally with expletives. This also underscored that edginess, that masculinity which seethes and breeds innovation, but can crush a sapling talent.

Were there many young chefs in the audience who yearn to work for these geniuses? Are there many who can last the roller coaster ride with them? Will their genius be their undoing?

At the National Womens Enterprise Day yesterday, also in Galway, I met a beautiful young woman called Niamh. Niamh, now working in the language sector, gigged in restaurants throughout her teenage and college years. Almost without exception ( two jobs in Dublin being the exception) she said that the chefs ( male) were horrible people who insulted and degraded their staff in equal measure. She loved the industry, she said but felt abused, disrespected and unappreciated.

Mark Moriarty, from Dublin voted worlds best young chef in the World this year closed Food on the Edge. He was awesome . He spoke quietly, without notes or a single expletive. He represents the new generation of exceptional talent available to the restaurant industry. He quietly requested that the industry treat this talent with more respect, develop their skills, give confidence and technical ability and back them up in their journey to where many of the gathered assembley now are. He also spoke of the responsibility of the young chefs to show up on time, commit and give their best in return.

If Food on the Edge opens up that conversation further and acknowledges the chasm between kitchen reality and the future of food, it will have done the industry some service.