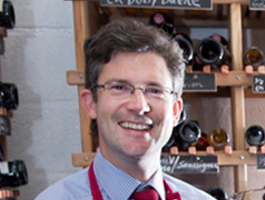 Colm McCan grew up in Co. Tipperary in the family guesthouse business, a listed historic property with a 250 year old wine cellar so no surprise that he has been interested in all things wine related since. Following completion of studies including Diploma in Business Management (Hotel and Catering Management – Block Release) GMIT, and wine studies through the WSET, Colm has worked in high profile hotels and restaurants both in Ireland and overseas for the past 25 years

He joined Ballymaloe in 1995, and wine accolades received to date under Colm’s tenure at Ballymaloe include Sunday Business Post  ‘Best Restaurant Wine List’ Nationwide; Wine Spectator Award of Excellence; Georgina Campbell Wine Award of the Year; Automobile Association ‘Notable Wine List’ award for Ireland; Daily Telegraph Top10 wine events in UK & Ireland, and Food & Wine Magazine Top 10 Best Wine Experience. Colm introduced the first electronic wine list in Ireland, and the first electronic restaurant wine list in the world with dedicated winemaker video clips which were specifically made for Ballymaloe with the winemakers, which at the time (just before the iPhone era!), received global publicity around the world.

Colm was also delighted to be personally awarded the Food & Wine Magazine Sommelier of the Year 2014. He is now the consultant sommelier of Ballymaloe with responsibility for the Ballymaloe wine list, the wine cellars, stock and stock control, training, wine purchasing and pricing. He also initiated and managed the Ballymaloe pop up wine shop at Brown Thomas Cork and continually runs an ongoing series of wine events, tastings and dinners throughout the year at Ballymaloe House and Ballymaloe Grainstore.

Colm is also the head wine lecturer at Ballymaloe Cookery School, running a wine education programme during the 12-week cookery course. He also invites national and international wine experts on a regular basis both in person to the classes at Ballymaloe Cookery School, as well as linking up live ‘skypeing’ in winemakers from their vineyards via the latest technology, and participating in live streaming international tastings, all culminating in a wine exam for the students at the end of their course.

Colm is responsible for putting together the Wine & Drinks Events of the Kerrygold Ballymaloe Literary Festival of Food and Wine, organising and co-ordinating a programme which brings together national and international wine & drinks writers and experts for the LitFest weekend with wine & drinks talks, tastings, seminars and wine lunches & dinners at Ballymaloe House and Cookery School.

Colm was singled out by the Irish Examiner in their Wine Highlights 2014 as ‘one person that made Ireland a great place to be a wine enthusiast’. Colm also works with Pascal Rossignol, of Le Caveau, the specialist wine merchant, and Sunday Business Post Wine Merchant of the Year Nationwide 2014. Colm is current Chairperson of the Cork based Munster branch of the International Wine and Food Society. When not in the wine cellar at Ballymaloe, Colm can be found among the vines at the Ballymaloe Cookery School.